Stories From the Edge of Blindness

In 2002, Retinitis Pigmentosa changed my life. This is my story of a slow approach to darkness.

My Husband is a Genius

I am super excited!  I have a WEBSITE, an actual website with pictures and everything!  I feel like a real grown up writer, and the best part of it is that my husband, Joe, imagined, designed and created it.  He is a genius who has made me look much more impressive than I could ever be.

Joe has made websites for writers, chefs, doctors and safety professionals. He has true range and talent.  He will be officially opening his business this summer, so if you need an amazing website, or know anyone who does, he is your guy!!!!

How We See Ourselves

Sarah is an extraordinary writer and an amazing woman. In writing about ballet, she shares wisdom about what it is to be alive, about life itself. I am grateful for her friendship and for the beauty she brings into the world.

On the Way to the Barre 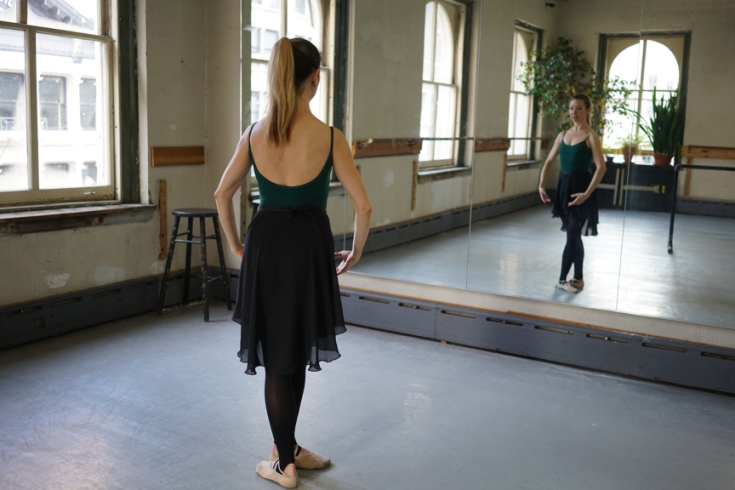 Ballet studios all have mirrors to help us learn to dance. When you look in the mirror, be kind to yourself no matter what vision you see staring back at you. Even if you are a professional or you have been at this for years, or feel you should “know better” or “look better” or “be better” than you perceive yourself to be, calm those voices, turn their volume down, change the channel. Even if you are brand new, unsure, scared, still learning, or think you are too old for this, it’s going to be okay. You risked the subway, the highway, and made your way here. Trust me, if you feel called to dance, you belong.

Believe it or not, the mirror is there to help you, it is not a instrument of torture. Use the mirror to remind yourself of the choreography. Use it to watch the teacher…

I am continuing my recorded poetry series with another poem that was originally published in Wildflower Muse.  Heather put out a submission call for work related to the theme of music, and “Little House (for Kat)” was what came from the inspiration of that theme.  Music has always been a big part of my life.  I grew up in  2 musical households.  My parents were both musicians and my brother, sister and I all inherited that love for music.  Music was also a big part of the longest and closest friendship of my life.  If you would like to read the published version of the poem, you can do so here.  You can also subscribe to my YouTube channel, if you’d like to hear more poetry.

You were 19 and I was 20,
living in a one bedroom apartment,
learning how to be inventive with top ramen.
We drank jugs of cheap wine,
chain smoked a grown up brand of cigarettes
and watched Little House on the Prairie re-runs.
My favorite were the seasons of Mary’s blindness.
We agreed it would be better to be blind than deaf,
long before I knew I was treading on Mary’s heels.
It was impossible to imagine living without the
chaotic rhythms and lilting tones of sorrow
that shaped our friendship.
You worked long days in a record store,
brought home shopping bags filled with
bootlegs and coveted early copies of new releases.
We crept around Los Angeles in your old red car,
memorizing the lyrics to Sinead’s new songs,
thinking up cool band names and
talking about affairs with older men.
You introduced me to Concrete Blonde,
got me hooked on Mary’s Danish and
spoon fed me Thelonious Monster.
You were with me in my first mosh pit,
where I was lifted out over the crowd
and lost my china doll shoes.
After seeing bands in the back rooms of
neighborhood guitar stores,
we spent hours in all night coffee shops.
You liked your coffee sweet, mine was always black.
I wrote bad song lyrics on napkins and
you created fortresses from salt shakers and creamer packets.
We made plans for the band we’d start some day.
Our life was marked by a sound track
of frenzy and shadows, a language
that brought us together,
but the blues crept up my back and
tore me away from our bastion
of skyways and melancholy.
Almost 30 years later, the record shop is gone
and you have moved across the ocean,
but the songs that conjure up our time together
will always send me reeling back to nightclub jitters.

The Weight of it All

I feel sad.  It sounds so simple, weighs so much.  I have watched the world crumble so many times, watched the people I love suffer and fade.  I have pretended the ground is solid, to help others feel less afraid.  I hide emptiness in the pit of my throat and weave rage into the air around me.  Sometimes it is easier to feel anger than to feel despair.

I have thought a lot about writing about the current shattering of things, but I can’t.  It isn’t my intention to be cryptic.  I am just not ready or able to write about what is going on, not with clarity anyway.  It is as if my sadness has drained the ink from my pen and the energy from my fingers.  I am escaping into the bottle more and more, but it is failing as an elixir.  I no longer hear it’s lies.  I am not depressed.  This shattering isn’t about me.  I am a witness and helpless. END_OF_DOCUMENT_TOKEN_TO_BE_REPLACED

The next poem in my recorded poetry series is another one from Wildflower Muse, published it 2016.  It is called, “Feet of Clay” and can be read here, if you’d like to read it.